There is a real sense within the automotive industry that huge change is imminent. Whether these will be as far-reaching as some predict remains to be seen, and whether they will be good or bad remains a matter of personal opinion.

We take a look at the biggest challenges facing the automotive industry in 2018, an industry that has been described as “undergoing the most significant change since Henry Ford industrialised automotive manufacturing in 1908”.

Tesla is involved in legal disputes with car dealerships in several American states because they sell their vehicles directly to buyers through their website rather than dealerships. These spurned dealerships maintain that this is a violation of industry ‘norms’, and lawmakers are reaching different decisions in different states: Alabama, Texas and Utah are among states where direct Tesla sales are banned; New Hampshire, Arizona and Missouri are among those where they are allowed (source).

Though this is not an issue outside the US, it is indicative of the type of change that may occur across the board. Assumptions held as normal are being challenged by developments in automotive technology: cars analysing condition of their parts and ordering replacements automatically directly from the manufacturer challenges the role of maintenance businesses; cars downloading and installing system updates automatically challenges the concept of needing to buy a new car to have access to the newest software.

Eurogroup states that “competition [has increased] to a new level that most companies were not yet prepared for and a new generation is challenging classical mobility concepts”. They describe keeping up with these changes as crucial, and we’d be inclined to agree.

The availability and interpretation of new data

According to analysis by Accenture, modern cars collect around 25gb of data per hour from various inbuilt sensors and cameras. This data allows for real-time insights to be drawn about performance, speed, condition of components and much more. In the case of breakdown or an accident, for example, the data gives insights on cause and effect and contributes to our understanding of how similar events can be prevented in the future.

The transfer, storage and analysis of this huge amount of data will change the way parts of the automotive industry work. Continuing the breakdown example, analysis can be carried out remotely and the required parts can be sent to the site of the event, rather than having to wait for a roadside mechanic to arrive and assess. Condition of components can be evaluated in real-time, meaning that they can be replaced when needed, rather than at arbitrary times like ‘every 10,000 miles’.

Such changes are likely to be beneficial, both for drivers and manufacturers. Other businesses need to keep abreast of changes to ensure they don’t fall behind: maintenance businesses and those involved in the analysis of data especially.

Perhaps the biggest technological development is the advent of cars where human control is not required. Despite a recent and tragic setback where such a vehicle killed a pedestrian, the technology is gaining credence and credibility around the world.

A report by KPMG rated countries by their preparedness for self-driving cars, and awarded scores based on governments' willingness to regulate and support their development, infrastructure, private sector investment, and large scale testing powered by a strong automotive industry presence. The Netherlands came first, followed by Singapore and the USA. The UK came 5th.

With names like Tesla, Uber, Apple, Google and Samsung (to name but a few) working on self-driving technology, the question has moved from ‘will driverless cars become reality?’ to ‘when will all cars have driverless capability?’. The automotive industry must be ready to adapt to the sweeping changes this technology is likely to bring.

Since Elon Musk made it his mission to change the perception of electric cars from fusty and bland to slick and exclusive, the industry has boomed. The graph below, produced by Bloomberg, shows how the number of manufacturers planning an environmentally friendlier alternative offering is predicted to triple between 2015 and 2020. 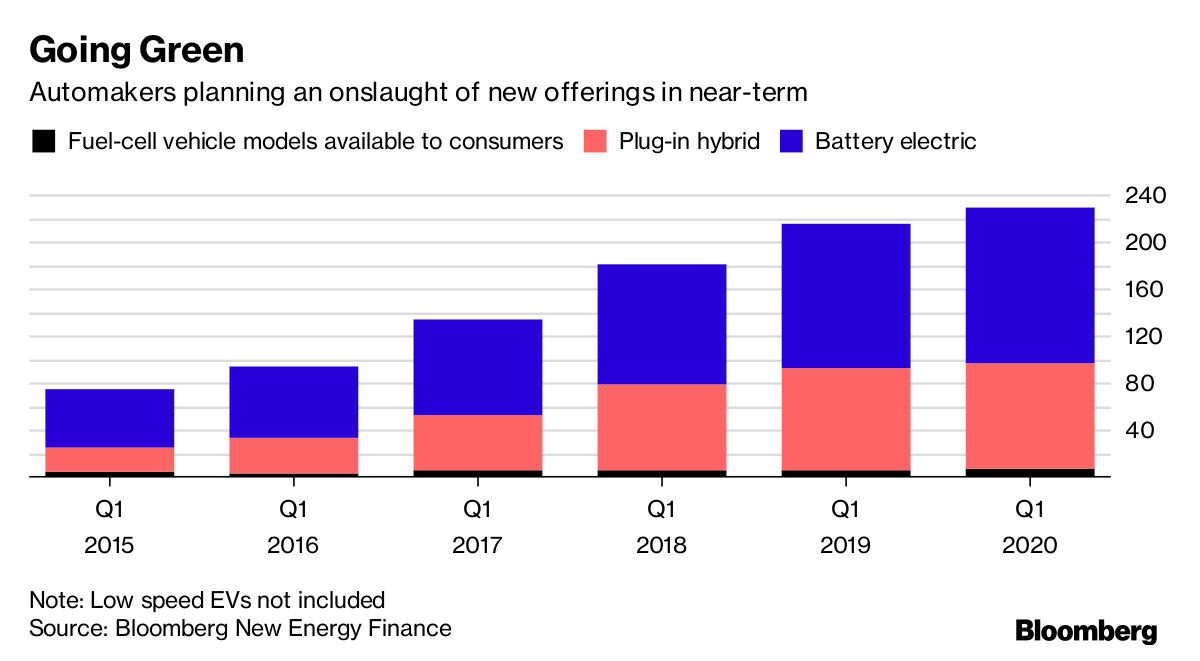 Increasing consumer awareness of environmental issues, combined with recent controversies like the Volkswagen emissions scandal, may show a surge in popularity of such vehicles.

On top of the challenges mentioned above, inter-industry buzzwords like artificial intelligence, blockchain and augmented reality may all soon be having an impact on the automotive industry too. Unfortunately we don’t have space to cover them all here!

In short, what better time to be involved in such an exciting and invigorating industry! If you want to ensure your business is suitably equipped to deal with the road ahead, get in touch with the Access Commercial Finance team and we can run you through relevant finance options.

Access Commercial Finance Limited is registered in England and Wales. Registered address: 4 Brewery Place, Leeds LS10 1NE. Company number 09218978. Access Commercial Finance Limited is authorised and regulated by the Financial Conduct Authority, Firm Reference Number 653920 . | Data protection Licence Number ZA079612. The Financial Ombudsman Service (FOS) is an agency for arbitrating on unresolved complaints between regulated firms and their clients. Full details of the FOS can be found on its website at www.financial-ombudsman.org.uk. Please note that not all of our products and services are authorised and regulated by the Financial Conduct Authority. Please also note that these non-regulated products and services are not covered by the Financial Ombudsman Service. Terms, conditions, features, availability, pricing, fees, service & support options subject to change without notice. ©2018 Access Commercial Finance Ltd. All rights reserved.